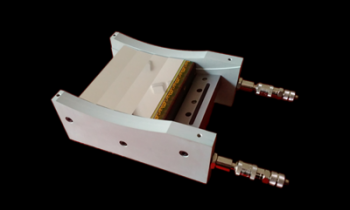 WidePIX 5X5 Curved is a large area imaging camera with a curved continuously sensitive surface. The curvature of the camera of 15 cm has been optimised for the small animal imaging applications.

Each Timepix tile consists of an edgeless silicon sensor. The edgeless sensor technology allows all of the tiles to be tightly packed together from all sides. Thus the whole imaging area of the camera is fully sensitive to the radiation – there are no gaps between the tiles in the image.

The camera is connected to the controlling computer via a USB 2.0 cable with a readout time of 0.65 seconds per frame. The thermal stabilisation of the camera is provided by an active water cooling system with chiller. The power consumption is 25 W.

Cancer research, bio-mechanics, and drug testing are just a few examples of where X-ray imaging contributes to research in biology and medicine. New photon counting detectors represent a serious advancement for these applications, compared to previously used synchrotrons. The energy sensitivity of modern cameras opens better possibilities to identify individual types of tissue. That has important consequences in various industries, for example cancer research, where the tumour tissue can be better distinguished from the healthy one.Find out more about this application here.