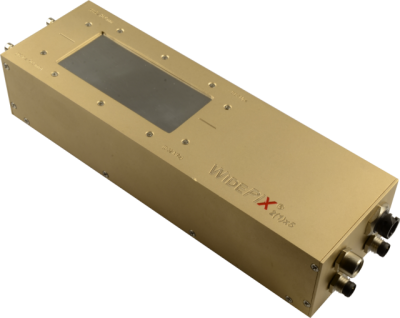 Advacam brings to the market a new range of X-ray imaging cameras that are optimised for composite material testing. As for biological applications, Advacam’s approach to non-destructive testing (NDT) is highly sensitive to low energies. In this way, light materials such as carbon fibres, epoxies, etc. are easily revealed in great detail. Hence, even challenging defects such as deep laminate wrinkles, kissing-bonds, delaminations, porosity, foreign objects and micro-cracks in the soft materials can be detected with a spatial resolution of 55 µm or better. Combining the sensitivity to low X-ray energy photons with the very high dynamic range of photon counting detectors creates a powerful tool for NDT in the aerospace industry and elsewhere.

Contrary to classical X-ray imaging setups, the robotic system produced by Radalytica gives nearly absolute flexibility of viewing angles. Therefore, robots are able to inspect using X-rays from different angles, allowing them to accurately determine the positions of defects. Moreover, robots further open the possibility of using 3D imaging techniques such as computed tomography and tomosynthesis. These are methods commonly used in X-ray imaging, but with limited applicability to large complicated shapes. Robots overcome this limit. The robotic systems could be used in quality control labs or built into production lines. The energy sensitivity is as important advancement of the imaging technology as was the colour photography and film. Contrary to regular X-ray imaging cameras, the photon counting cameras can discriminate or even directly measure energy (wavelength) of incoming photons. Since each element of the sample has different X-ray attenuating properties, it is possible to estimate material composition of the sample if the energy of the photons is measured. The spectral sensitivity offers major improvement over the conventional X-ray imaging cameras