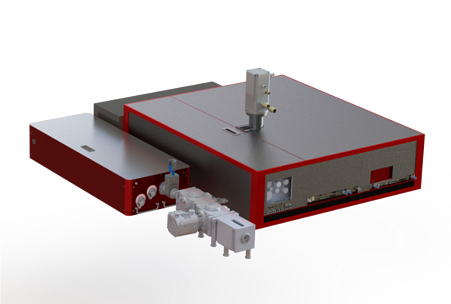 KMLabs Pantheon™ platform is a pulsed EUV source, consisting of the necessary instrumentation for the generation of EUV light as well as a beamline to facilitate delivery of pure EUV photons to your user-supplied experimental station. Individual pulses of light from Pantheon have duration in the femtosecond regime and take the form of a laser-like, coherent, and highly focusable beam.

Harness the extreme ultraviolet (EUV) portion of the spectrum in your laboratory.

From nanoscale imaging to ultrafast magnetization dynamics, photoemission spectroscopy, and semiconductor lithography, a multitude of materials and technologies have characteristic energy or transitions that fall in this critical range. Harnessing the power of this portion of the spectrum is now possible in a laboratory setting for scientists who want to focus on the experiment rather than the light source.

Learn more about these components of a Pantheon EUV source:

Applications this product can be used for: