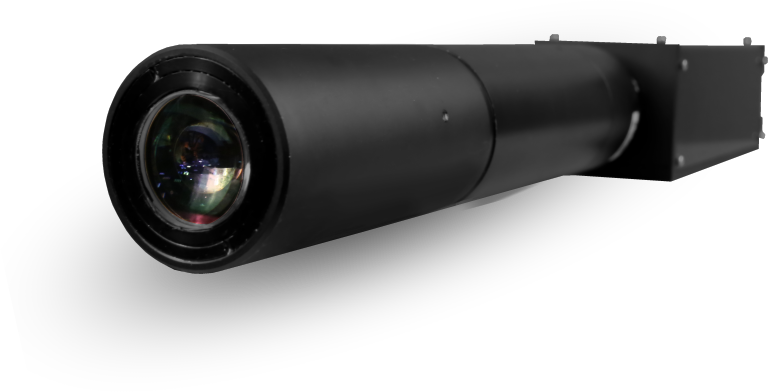 The Chromaline MPLS is a modular line chromatic confocal 3D sensor. With a measuring rate of 1800 lines/s (324000 points/s) it is by far the most rapid chromatic confocal sensor on the market and the only one capable of measuring an entire line simultaneously.
The MPLS comprises an opto-electronic unit (controller) and an optical head connected by means of a fibre optic bundle. Different configurations of the sensor exist, with different models of controller and optical head.
When a sample is inside the sensor measuring range, the sensor projects on its surface 180 visible light spots. The points are arranged along a line and are equidistant. The depth of the measuring range, the size of the spots and the distance between two adjacent spots depend on the particular optical head model.
The sensor measures simultaneously the position (X and Z coordinates) of all sample points illuminated by a light spot: X is along the line and Z is along the optical axis. The technology used for measuring the Z coordinate is Chromatic Confocal Imaging (CCI).. CCI is a non-contact optical technology for 3D measurement, characterized by very high resolution and signal-to-noise ratio (SNR). An important characteristic of this technology is the fact that there is no “cross talk” between the points that are measured simultaneously. This characteristic allows the measurement of sample points with very low reflectivity even when some very bright sample points are located near them.

The ChromaLine MPLS is the only multipoint chromatic confocal sensor on the market. It achieves a very high throughput by measuring a large number of points simultaneously.
In order to conserve the high resolution and high “cross-talk” rejection characterizing the confocal setup, each point on the line should be measured by means of an independent channel. Confocal setup also requires the distance separating two adjacent spots projected on the sample surface to be greater than the spot diameter.

The MPLS multipoint chromatic confocal sensor consists of 180 independent chromatic confocal channels. Each channel comprises its own point source S, pinhole S” and spectrometer, and measures a single point S’ on the sample. The chromatic lens is common to all the channels.
The 180 point sources are achieved by using 180 optical fibres which are illuminated by an internal light source inside the controller. The fibre optic bundle is connected to an optical head, and the other ends of the individual optical fibres are arranged in a line in the input plane of a chromatic lens which projects their images on the sample surface.
The light beams which return from the sample are collected by the same chromatic lens which focuses them on 180 pinholes located on its output plane. A second fiber optics bundle connects the pinholes to the spectrometer.