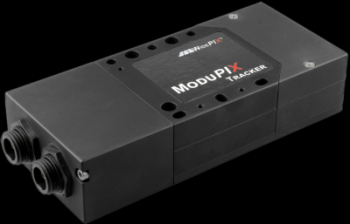 The ModuPIX Tracker was designed specifically for particle tracking, which is often required in the nuclear and related industries.

Two fast versatile ModuPIX modules are assembled and synchronised, thus providing a 3D particle tracking capability. Each module is a single Timepix device with fast parallel readout of up to 850 frames per second. An independent USB 2.0 communication channel for each device assures uncompromised read-out speeds for the system. All modules in the system can be operated synchronously or triggered independently. The sensor type and thickness is optional dependent on the needs of the customer.

The ModuPIX Tracker can be used in a variety of applications such as particle tracking, Time-of-Flight (TOF) imaging, multilayer Compton imaging, radiation monitoring and many others. The sensors can be adapted for neutron imaging by deposition of converter layers of lithium fluoride (6LiF). The spatial resolution in some applications (thermal neutrons) can go down to a few microns or even submicrons (ions).

NASA together with IEAP CTU and University of Houston has used MiniPIX type of cameras in the International Space Station (ISS) to track charged particles and measure their energy deposited to study and surveil the radiation exposure that astronauts face in space. It is possible to measure accurately the dose in the complex environment of space where the radiation environment is completely different than on surface of the Earth.

NASA is flying the ADVACAM’s ModuPIX Tracker in the International Space Station since March 2017. The goal of the project is to demonstrate the capability to determine the directional characteristics of charged particle energy spectra in space.